While I am healthy and in my mid 50s, I place a high premium on my ability to remain active lifting weights and be competitive in sports.  I am also in the presence of mold on occasion while researching or helping mold sufferers.  Knowing that glutathione becomes depleted with age and actively playing basketball, lifting weights, and hiking on a regular basis, CitriSafe’s Acetyl Glutathione Supplement for age related glutathione depletion has provided me increased energy levels, no major injuries, and I have avoided any mold sensitivity for over 7 years.  What follows are the reasons why I recommend CitriSafe’s Acetyl Glutathione.

CitriSafe has proudly produced a premier quality acetyl-glutathione for over a decade.  Tens of thousands of patients have used CitriSafe’s Acetyl glutathione for many reasons.  The product begins with using pharmaceutical grade glutathione with the highest levels of purity and made using an all-natural process. First generation glutathione has little to no bioavailability.  This means that it is destroyed or broken down during the digestive and metabolic processes and does not reach the blood system.

Second generation liposomal delivery of glutathione improved bioavailability, but dosages remain very high to allow for degradation.  Liposomal also suffers from a putrid smell due to sulfur in the formulation.

CitriSafe’s glutathione supplement is acetylated for maximum absorption into the body’s cells.  This formulation, developed by Walter Hayhurst R.Ph., employs proprietary nanotechnology using a micro-cluster encapsulation that protects the acetylated glutathione through the digestive process.  The result also provides the benefit of taking a lower dose, knowing that the product will not be wasted. 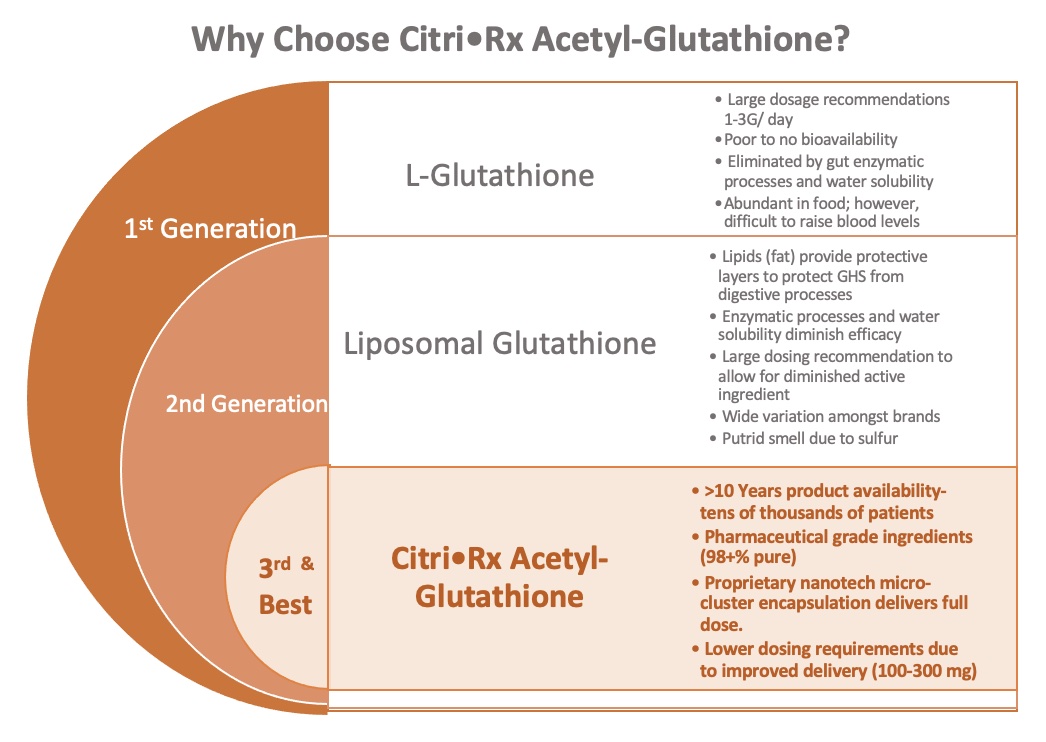 Why We Need Glutathione?

Glutathione is the body’s “master antioxidant”.  It is found in almost every cell in the body. It helps to protect your body from cell damage caused by free radicals and oxidative stress. Glutathione is essential for the body’s immune system functions and is critical to rebuilding and repairing tissue.  The highest concentration of glutathione is in the liver, making it critical in the body’s detoxification process.  Glutathione is also an essential component to the body’s natural defense system. Viruses, bacteria, heavy metal toxicity, radiation, certain medications, and even the normal process of aging can all cause free-radical damage to healthy cells and deplete glutathione. Glutathione depletion has been correlated with lower immune function and increased vulnerability to infection due to the liver’s reduced ability to detoxify. You do not have to reach your toxic load to benefit from CitriSafe acetyl glutathione.

Antioxidants play an important role in protecting our bodies and removing or neutralizing harmful molecules known as free radical.   Free radicals are unstable atoms that damage and destroy cells from the inside, causing illness and rapid aging.   Glutathione is abundant in almost every cell in our bodies.  As an antioxidant, is critical to our detoxification system because it neutralizes free radicals that would otherwise destroy cells.   Glutathione also reactivates other antioxidants, such as vitamins C and E.

We all Experience Glutathione Depletion as We Age 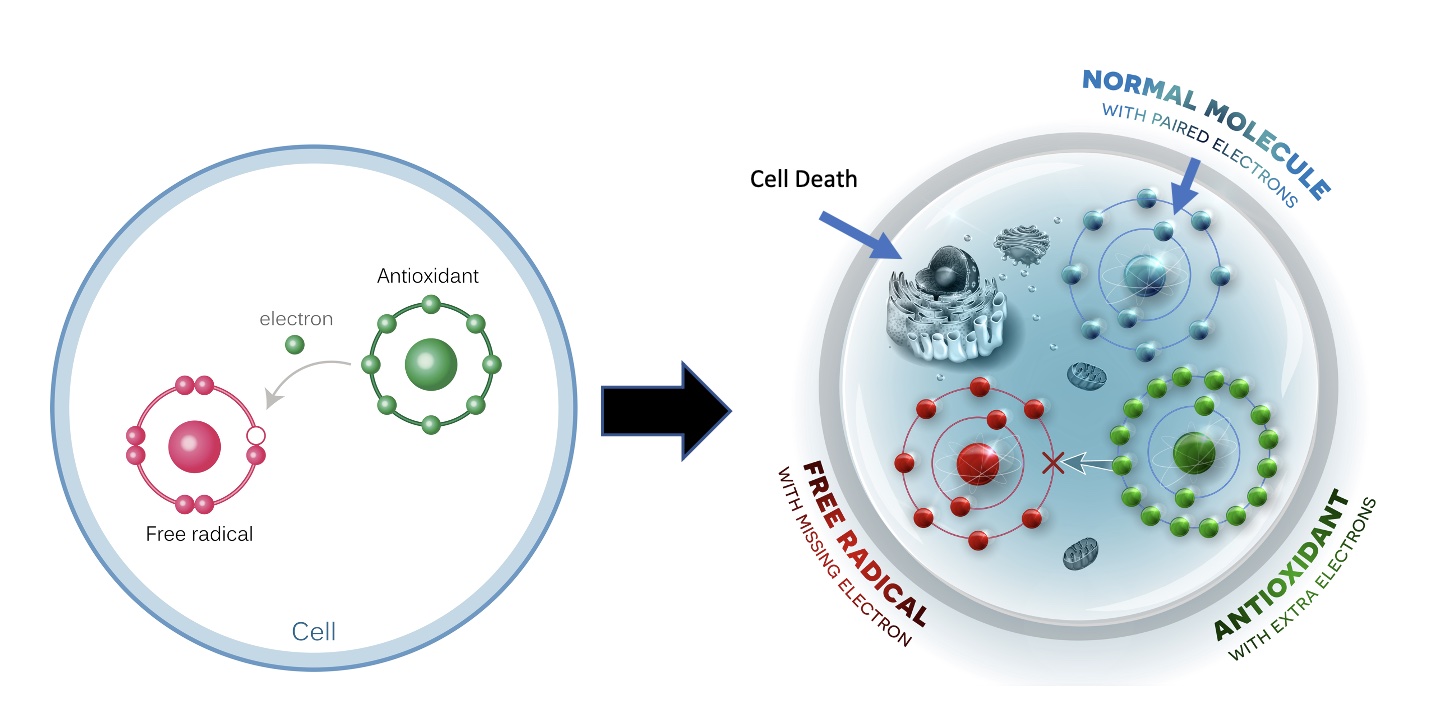 Free Radicals can either destroy the cell or be neutralized to maintain cell life.

Glutathione: The most powerful and potent antioxidant that detoxifies the entire body

Glutathione plays its most important role in the detoxification of the body and is vital for liver health.   Glutathione depletion that occurs with age is also further increased with the use harmful substances such as alcohol, drugs, and medicines which can reduce glutathione levels in the body.

The conjugation of glutathione in the liver (tripeptide consisting of three amino acids – cysteine, glutamic acid, and glycine) is important in both phases of the liver’s detoxification pathway.  Essentially, glutathione conjugation helps to detoxify and eliminate poisons and toxins in the liver, lungs, intestines, and kidneys. At the same time, the conjugation of glutathione with toxins helps to detoxify and eliminate fat-soluble toxins (including mycotoxins) and heavy metals. It detoxifies even other environmental toxins such as many solvents, herbicides, fungicides, polycyclic aromatic hydrocarbons, and lipid peroxides.  The reduced ability to conjugate glutathione may increase toxic load and oxidative stress.  It also never hurts to add an air purifier to your home to improve indoor air quality. 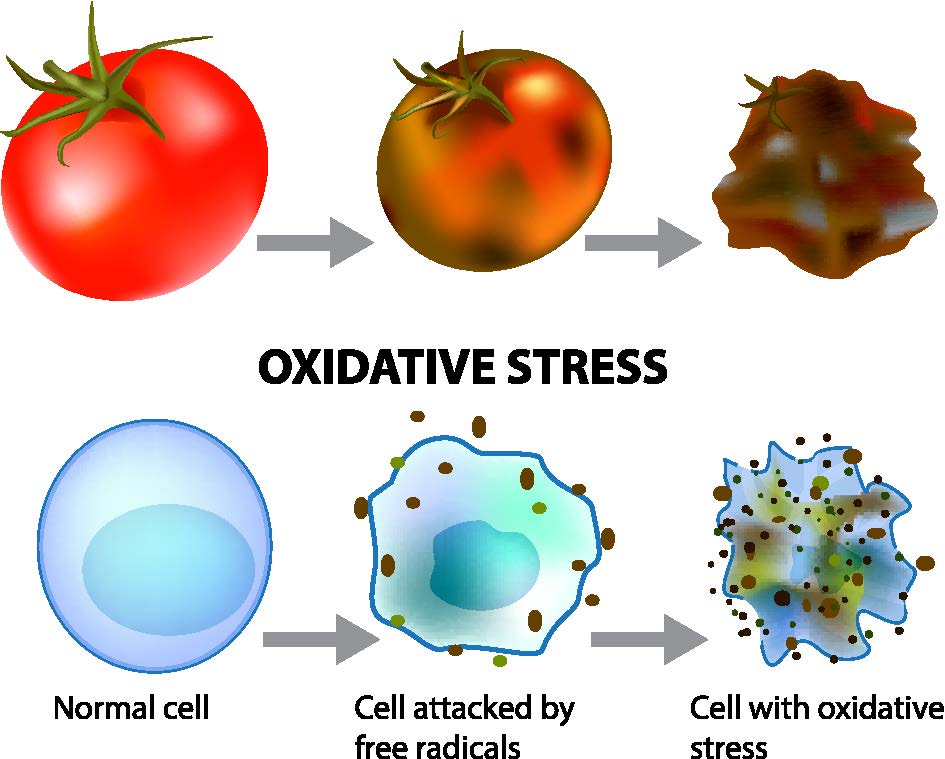 Citri•Rx Acetyl-Glutathione for glutathione depletion is optimal because it gets through the gut without degradation, reaches the cells, and is absorbed to do its job.

Both cardiovascular and physical exercise are crucial to being active during senior years.  This process involves breakdown and recovery of muscle tissues.  Lack of activity or inconsistency often leads to muscle and joint pain, weakness, slow progress, increased fatigue, and increased recovery times.

I encourage you to try CitriSafe’s Acetyl-glutathione and compare the results to address glutathione depletion with aging and enhance your physical performance and recovery.   It has the highest quality ingredients available that are combined with an advanced nanotech formulation that avoids gut degradation and is acetylated for absorption into to cells.  Many consumers of this product tell me that there is a noticeable difference taking CitriSafe’s Acetyl Glutathione compared to other forms or liposomal delivery.  CitriSafe’s glutathione is sold in 100 and 300mg dosages.  This is less than the 500mg plus dosages for most glutathione supplements.

Cesar Collado is a former pharmaceutical R&D senior executive, venture capitalist, and seasoned strategy consultant in biotechnology and technology industries in general. He currently works as an advisor to multiple technology start-ups and advises several companies with technology solutions, including companies that provide healthcare and other services for environmental illness.

Cesar worked with MicroBalance Health Products from 2014-2019, where he had responsibility for strategy, revenues, marketing, and finance, as well as, writing all original content for the company’s newsletters during his tenure. Cesar is passionate about awareness and treatment of environmental illness as a significant, unmet and misdiagnosed, medical need. He has partnered with Integrative Physicians, Bau-Biologists, Environmental Inspectors, Mold Remediators, HVAC IAQ Specialists, and other professionals to generate educational materials for the environmentally ill. Cesar currently writes original content for ImmunoLytics, Bio-Balance, and CitriSafe: Protocols and Products for a Healthy Life.